With offices on 3 continents and clients across the globe, we are building the future of talent acquisition and employer branding.

Advertise across the web and engage with candidates where they spend time.

What Makes Facebook an Ideal Venue for Employer Branding?

At the beginning of 2018, Facebook announced (as it so often does) that it was changing its algorithm. This time, its goal was to show users less content from businesses and more content from friends and family in their newsfeeds. For marketers in general and recruitment marketers in particular, this seemed like a catastrophe. The platform had already been making organic reach harder and harder to come by, and now they were going to drive the final nail in the coffin. The world, however, didn’t end, and Facebook continues to be a platform that can help you further your employer brand and attract job candidates who can make a difference for your organization. How is it able to do this? We’re glad you asked.

Your Candidate Personas Are Already There… And So Are Your Employees

We’ve said it before and we’ll say it again: passive job seekers are the key to any successful recruitment strategy. Without them, you’re limiting yourself to only 20% of potential applicants. For this reason, social media sites that draw large numbers of potential applicants (those who might be extremely unlikely to see an ad or a job listing on a traditional job board) can be a lot more valuable than platforms that are specific to recruitment. And guess which platform has the greatest number of passive job candidates? That’s right, it’s Facebook, with a monthly active user base around 2 billion. What that figure means in practice is that, by and large, anyone you’re hoping to reach with your employer brand is fairly likely to be at least a monthly, if not daily, Facebook user. Though other platforms may offer some advantages in terms of branding that Facebook doesn’t (LinkedIn, for instance, is actively trying to make sure that people and businesses are able to engage with one another), none of them can match it on this front.

Crucially, Facebook’s extremely wide user base also means that your employees are probably users. How does this help you with employer branding? Simple: Facebook is trying to put content created by real people front and center, this means that if and when your employees share news about your company and insights into what it’s like to work there, their words (and images) can have a huge impact on your target personas. Most people are already more receptive to the thoughts and opinions of people they know, so by turning some of your exiting team members into brand ambassadors on social media, you can increase the strength of your employer brand in spite of the changes to Facebook’s algorithm. Even by simply encouraging your employees to sometimes “share” posts from your company’s career page can be a huge help in your employer branding.

Okay, so far we’ve seen the extent to which Facebook’s status as the world’s largest social media platform can help you to reach people even in the face of a seemingly-unfriendly algorithm. But how does it help you reach the right people? After all, you want to be fairly discriminating in who your target with your messaging. As it happens, Facebook makes it fairly easy to make sure that your posts are being seen by the right people. We’ll talk about Facebook’s targeted ads in just a sec, but it’s worth pointing out that even a normal, un-sponsored post from your corporate or career-centric Facebook page gives you the option of selecting a particular subset of your users to show a given post to. If you’re recruiting an international or multilingual audience, for example, you could make sure that a post written in German is only seen by German speakers. By limiting your audience in this way, you ensure that your content isn’t being seen (and inevitably ignored) by those whom it won’t interest. This will make for better engagement numbers, which can actually cause Facebook to increase the number of people seeing your content among your targeted group.

As it happens, Facebook’s propensity to show your content to more people if you’re able to target a group that will find it especially relevant also holds true for ads. Here, the difference is that your targeting options are much more robust, giving you the ability to target not just geographic region, interests, education, etc. but also to run “remarketing” campaigns (in which your ad is shown only to users who have already been to your website or interacted with your brand in some way). You can even run “reverse remarketing” campaigns, in which your ads are only shown to do those who haven’t encountered your web presence before. In this way, you can be certain of staying in control of the first touch with potential new recruits, making sure that they encounter a brand message that is tailored both to their interests (as conceived during the ideation process for your candidate personas) and to where they are in the recruitment funnel. This level of granular control over your own brand narrative can make a big difference in your efforts, enabling you to ease people through the candidate’s journey until they’re ready to apply for a position with your company.

An Embarrassment of Features

Last but not least, we get to the final reason that you should treat Facebook as a destination for your employer branding: its wealth of uncommon features. For instance, Facebook supports not just video content, but live video streaming. It also now supports job listings, in addition to having a robust events infrastructure (Facebook events remain one of the top draws to the site), groups, immersive VR experiences, and much more. It’s not so much that any of these features are unique or game changing on their own, but by offering them all on a common platform, Facebook opens up the possibility of sophisticated, value-additive integrations between them all. For instance, if you have an event page for one of your recruiting events, you could use that same page as a venue for live streaming the keynote speech at that event. Conversely, if you’re actively posting job ads on Facebook, each one could include a 3D panorama of your office space to help entice users to apply.

In each of these instances, recruiters have the chance to get creative. With a working knowledge of these features, you can provide your candidate personas with the most robust possible version of your employer brand—a multimedia story playing out in front of their eyes, giving them a rich and engaging answer to the question, “why should I consider a career with this company?” In this way, you can rise above the competition and establish yourself a destination workplace—no mean feat in such a competitive environment for talent acquisition.

Talent Acquisition in the Tech Industry

RPA and the future of Recruitment

Facebook for Recruitment:
A field Guide for Smart Recruiters 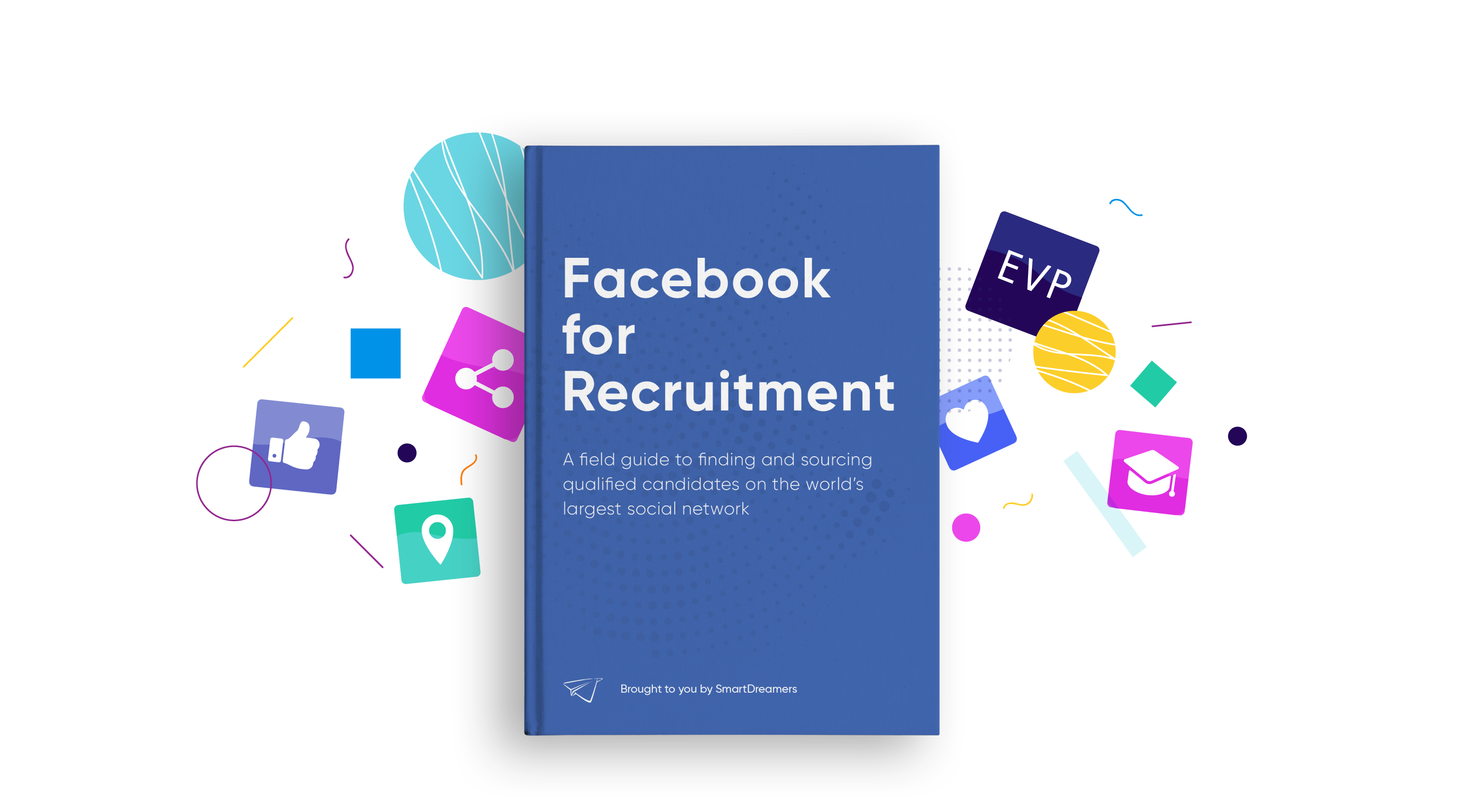 Most popular
SmartDreamers Perspectives: How RMA Can Impact the Auto Industry
Today, the auto industry faces a number of unique challenges: creating cars that drive themselves, developing engines that can run more effectively on alternative fuels, and introducing greater digital connectivity into the automotive ecosystem are just the tip of the iceberg. Each of these challenges is also, of course, an opportunity. After a difficult period during and after the global recession, automakers are in an exciting ...
END_OF_DOCUMENT_TOKEN_TO_BE_REPLACED
The Top Recruitment Marketing Channels in the Retail Industry
In some ways, the retail industry is unlike many others. There’s a tremendous diversity of size, scope, and cultures among the many businesses that need retail help—and there’s just as much diversity among the job candidates themselves: you’ll find everyone from students seeking short-term or part-time employment to career veterans with a penchant for salesmanship. There is, however, one way in which hiring for retail positions is very similar to hiring in most other industries: finding the right people can be extremely difficult.
END_OF_DOCUMENT_TOKEN_TO_BE_REPLACED
How to Manage Your Employer Brand Through the Coronavirus Crisis
It goes without saying, the last several months have been a tough.   With some heavy news cycles and uncertain times all around, you are probably feeling a little lost wondering how to manage your employer brand during this challenging time. A lot of things are changing, there are notable shifts in candidate behaviour, media consumption and the use of social platforms that require brands to reconsider how they relate to their users.   If the global COVID-19 crisis has taught us anything, it’s how many options we have for ...
END_OF_DOCUMENT_TOKEN_TO_BE_REPLACED
Most popular
1
7 Emerging Trends in Talent Acquisition in 2020
And just like that, we find ourselves almost tending the second half of 2020.   As we reflect back, there are encouraging signs that some of the trends we saw first emerge in late 2019/early 2020 are not only still going strong but are in fact ramping up for a big close to the year.    We’ve gathered our top 7 of these trends, the ones we see not only going strong, but gathering steam and getting set to make an even bigg...

SmartDreamers Team
2
How to Run a Recruitment Campaign with Google Ads
It’s a rare group of businesses that are so integral to the fabric of society that their names become commonly-used verbs. For a time, Xerox managed it. FedEx is still used as a verb from time to time. But since the dawn of the modern web, Google has been the most obvious example. It’s not just a powerful web platform, it’s an activity.   Of course, Google is also an extremely integral part of the recruitment landscape. Nowadays, when businesses worry about SEO (search engine optimization), they’re almost always worrying about Google in particular. Whe...

SmartDreamers Team
3
How to Manage Your Employer Brand Through the Coronavirus Crisis
It goes without saying, the last several months have been a tough.   With some heavy news cycles and uncertain times all around, you are probably feeling a little lost wondering how to manage your employer brand during this challenging time. A lot of things are changing, there are notable shifts in candidate behaviour, media consumption and the use of social platforms that require brands to reconsider how they relate to their users.   If the global COVID-19 crisis has taught us anything, it’s how many options we have for ...

Give your email. Get our newsletter